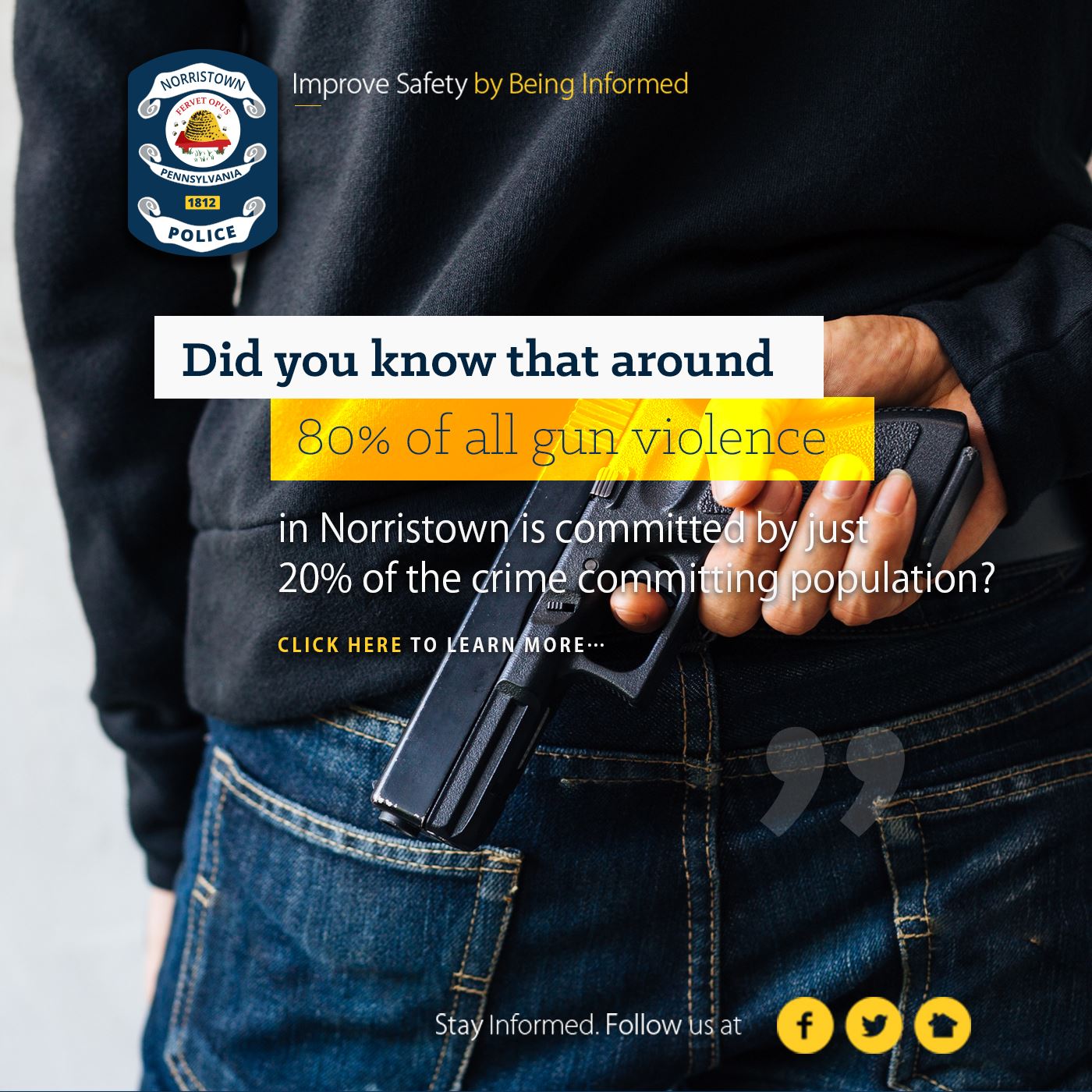 Campaign: Improve Safety by Being Informed

Gun violence in Norristown is one of the most urgent and important problems that NPD faces. Just one shooting or shots fired incident, in a neighborhood, greatly and negatively impacts the neighborhood and reduces the quality of life for its residents. It also has a negative impact on the rest of the town as well. Beginning in 2014, with the arrival of Chief Talbot, the police department initiated a whole new approach toward dealing with gun violence and shooting responses. Every incident of gun violence is made a priority, with or without the cooperation of the people involved. We then developed and implemented violent crime initiatives.

Based on Pareto’s law, we could predict that 80 percent of gun violence will be produced by 20 percent of the crime committing population. This number is significant because through researching historical gun violence in Norristown, we were able to collect and analyze data, which gave us the evidence-based data we needed to move forward. We were able to identify those individuals who had been involved in prior gun violence and therefore may have a higher probability of being involved in future gun violence. These individuals were termed Impact Players.

The Impact Players form a very small but highly active minority of our residents. Controlling their behavior offers significant benefits in safety and quality of life for all of us. Not only are these serious offenders much more likely to engage in gun crime, but they are also significantly more likely to become victimized by other Impact Players. Therefore, by applying more focused attention on them, it will save lives, including their own. Additionally, by using this historical data, we were able to narrow further down those members of the Impact Player community. These individuals would be considered even more likely to be Trigger Pullers. With our limited resources and workforce, it is much smarter to prioritize our attention on a small number of individuals, for a higher return of reduced gun violence.

During the summer of 2017, we experienced a spike in gun violence. While most of the increase could be linked to a particular group of serious young offenders, intent on settling their disputes with the use of guns, we needed to regain our prior momentum.

Based on this need the police chief came up with a new (40) point plan, with six (6) distinct steps to improve our reduction in violent crime. This plan encompassed our prior tested approaches but added important additional steps. These steps included identifying “Gun Violence Hot Spots.” While most of Norristown’s neighborhoods were enjoying an increased level of safety and quality of life, some neighborhoods were still struggling with an inordinate amount of violence. To stem this violence, we began to shift resources toward the locations that need it the most — the gun violence hotspots. By analyzing four years of homicides, shootings, and aggravated assaults with a firearm, we were able to identify ‘impact zones.’

Geographic commanders developed specific policing plans for each of the impact zones, where we dramatically increased the directed patrolling. We used focused deterrent measures on Impact Players within these impact zones and partner with social service agencies to deliver any needed resources to the residents of these areas. Additionally, we began developing resident leadership in these areas, through programs like the Citizen’s Leadership Academy, Citizen’s Police Academy, and the Neighborhood Watch Program.

Another step was to focus on eliminating the drug markets associated with gun violence hotspots. We know that drugs and guns go hand and hand. So it would stand to reason that if we worked with residents to eliminate the drug markets, we can reduce the gun violence in these hot spots and improve the quality of living for our residents. Geo Commanders were tasked with identifying all of the drug markets in Norristown. The prioritization process took place based on the connection of the drug market to violent crime hot spots, then to Impact Players within these areas. Once the data had been analyzed, investigations are conducted to identify and arrest the most violent offenders. Once the drug market is closed, we engage in maintenance policing, to prevent the reemergence of that drug market. We also bring in any social service agencies to help the residents, and again, develop and assist community leaders in becoming partners or stakeholders in their community.

I also think it’s important to briefly discuss our partnership with the Montgomery County District Attorney’s Office. Beginning in July and ending on August 8th, of 2017, one of the main reasons for our spike in violent crime was driven by a feud between Norristown and Pottstown youths who set about solving their disagreements with guns. As a result of these incidents, Norristown experienced eight shootings, one of which resulted in a homicide. During these investigations, NPD partnered with the Violent Crime Unit of the District Attorney’s Office and the Pottstown Police to bring an end to the violence and arrest the perpetrators. It was also a direct result of this feud and the associated investigations by all three jurisdictions that District Attorney Kevin Steele created the Norristown Community Prosecution Team. Much like its predecessor in Pottstown, this team of ADAs is dedicated to the Norristown community. From prosecuting our cases, working with victims for diversionary outcomes or attending community events, this partnership has been a success.